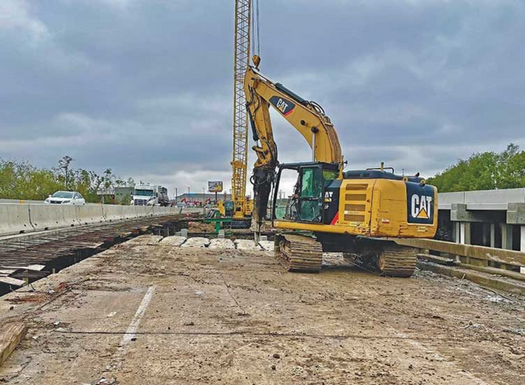 Wear and tear and the need for increased capacity necessitated a $45.5-million project to widen and rehab a heavily traveled 2.5-mile stretch of Interstate 10 in Louisiana’s Calcasieu Parish. But the same high volumes of traffic that brought about the project have also challenged the team constructing it.

Creative sequencing and detailed planning have helped the team work around traffic and other obstacles, including utility relocations and repeated jobsite shutdowns amid a historic hurricane season and the COVID-19 pandemic.

The Louisiana Dept. of Transportation and Development (DOTD) awarded the bid-build contract to Gilchrist Construction Co. LLC, which specializes in state highway construction and is working on other I-10 projects in the state. DOTD oversaw internal structural designs. Construction began in January 2020.

Extensive planning is essential when working on highway projects where traffic volumes are high, and the I-10 widening in Calcasieu Parish is no exception, says Marc Dinnat, chief project officer with Gilchrist. “We do a lot of detailed work planning before we go out on a whim and just start building something,” Dinnat says. “We make sure we have a good plan, a good process in place to ensure success before we start.”

The project involves widening I-10 eastbound and westbound from three to four lanes on each side between Louisiana Highway 108 and I-210. It also entails fully rehabbing the roadway surface and replacing each span of the Maple Fork Bridge. “The surface of this portion of I-10 required frequent maintenance and has reached its service life,” says Tammy York, DOTD spokeswoman.

With average daily traffic of 81,000 vehicles, Louisiana’s I-10 corridor is essential to the nation’s freight industry and an important piece of the highway system for the traveling public.

“By reconstructing the concrete section, rehabilitating the asphalt section and installing auxiliary lanes, the community freight haulers and travelers will experience a much smoother roadway, increased capacity and minimal maintenance delays,” York says.

In replacing the Maple Fork Bridge, the project will raise the spans to above the 100-year flood elevation so they can operate continuously throughout weather events. Other work includes new drainage structures, median barriers, guardrails, cable barriers and permanent striping.

The project team had to maintain two lanes of traffic in each direction at all times, and strict limits on lane closures meant that construction could take place only at night and during off-peak hours.

Intricate sequencing was critical to steady progress on the heavily traveled stretch of interstate. Before the project even began, the team redesigned the sequencing of the entire job and reconfigured detour roads. Through modified sequencing, the team was able to minimize the number of traffic swaps, meaning the traveling public could maintain their direction of travel for longer periods of time without unnecessary changes.

“We spent an extensive amount of time planning, resequencing the job, laying it out with Google Earth and going out and taking shots to make sure things would fit,” Dinnat says.

In addition to the lane closure restrictions, the project is being constructed without an offsite detour, requiring workers to maintain the full flow of traffic within the project limits.

“Fortunately, there are collector roads at the nearby interchange, which along with temporary widening allows diversion of the mainline traffic to the collector roads,” York says. “In other areas where widening is occurring, it is being done to the inside of the roadway, leaving the outside lane and shoulder available to traffic.” Crews are partially building the bridges in each direction to serve as an onsite detour while they complete the remaining portions of the bridges.

The need to move additional utilities presented significant challenges beyond what the contractor anticipated.

When a preconstruction meeting took place between the contractor and the utility providers, the contractor discovered the job would require moving more underground utilities than originally anticipated. Fiber optic lines, specifically, hindered progress underground. Not only were there more lines, but more utility owners would also need to be brought into the process.

“So it significantly extended the time of these relocations and altered the sequence of construction,” Dinnat says.

To accommodate the relocations, the project team switched up sequencing for the bridge construction. Instead of building the eastbound structure first, they built the westbound bridge so the utility relocations could take place without significantly delaying the project, Dinnat says.

Among other site concerns, elevation differences made it difficult to construct the concrete median barrier that divides the eastbound and westbound lanes. A standard median barrier is about 42 in. to 54 in.; because of the variances in elevation, some segments of the wall will be 120 in. tall. “A significant portion of that barrier wall was very tall, which made it unique and challenging to construct,” Dinnat says.

To build out the structure’s components, the contractor designed a forming system to accommodate not only the wall’s height, but also its geometric design, which runs through an elevated curve. Because of uncertainties regarding how long it would take to design and construct this atypical wall, the project team has had to closely monitor costs and time spent on this portion of the project.

Another issue between the eastbound and westbound lanes was that the project required widening the traffic lanes into the depressed median that separated them. The widening called for an embankment and asphalt for the base, and a standard section of pavement on top.

The project team proposed an adjustment to the pavement section that did away with the earthwork portion, eliminating 27,000 cu yd of embankment. “Without having to put dirt and earthwork in the median, we were able to go back to work quicker after weather events,” Dinnat says.

Altogether, the project is using 98,000 tons of asphalt paving, 10,000 cu yd of concrete and just over 2.5 million lb of reinforcing steel.

With work taking place in Calcasieu Parish, the project team encountered multiple shutdowns because of hurricanes and the COVID-19 pandemic. In the fall of 2020, hurricanes Laura and Delta and Tropical Storm Beta hit the area within six weeks of each other, with Laura making landfall in southwest Louisiana as a devastating Category 4 storm. “You always have the threat of storms; you don’t always have multiple hurricanes in one season come through,” Dinnat says.

The project team had to suspend the project and secure the jobsite in advance of each storm. For Laura, the eye passed directly over the project. “Luckily our equipment was salvaged, and there was no significant damage,” Dinnat says.

In the aftermath of Laura, the project team had to contend with increased traffic volume because of rescue efforts and debris cleanup. “That affected our administration of the project. And we had to remain shut down for a period of time,” Dinnat says, adding that work was put on hold for several days leading up to the storm, and then about two weeks afterward.

A separate issue that arose from the hurricanes was that temporary housing became scarce, and the contractor’s traveling crews needed a place to stay. “There were no rooms. There were no hotels. A lot of them were closed, damaged or filled to capacity with people who had lost everything,” Dinnat says.

The contractor had to figure out creative ways to find alternate accommodations, including hotel rooms that were farther away and required a longer commute.

The COVID-19 pandemic further complicated efforts to bring in out-of-town crews. “Living arrangements had to be modified because of social distancing requirements. We had to separate people more than we typically would have,” Dinnat says.

Not only did housing issues create logistical challenges, but they also resulted in additional expenses that the contractor had to absorb.

The pandemic temporarily interrupted work on the jobsite, which the project team voluntarily shut down for two weeks to figure out logistics and implement safety practices to protect workers. “Things we had taken for granted and never worried about came to the forefront,” Dinnat says.

On track through tech

Despite hurdles and interruptions, Dinnat says the project has so far been able to remain on schedule, thanks in part to technology. Twice a week, the management team deploys drones to view the jobsite remotely and address any concerns that arise.

For precision, the team has relied on 3D models and machine controls. “In the tight, confined spaces we constructed the project in, the machine controls were critical to having efficient construction,” Dinnat says.

Throughout construction, the project team used Oracle Primavera P6 planning software to maintain a tight schedule, along with Microsoft Teams and Zoom for collaboration and meetings.

“Any time there’s an issue that a particular field manager or foreman may be having, we can get the parties on a video conference very quickly, resolve the issues and move forward,” Dinnat says.

As of mid-January, the project was 56.5% complete, York says, with remaining work including the replacement of portions of the Maple Fork bridges, asphalt, drainage, signage, centerline concrete barriers and permanent striping. Embankment, guardrail and cable barrier work also remains.

The project is on track for completion by fall 2021.