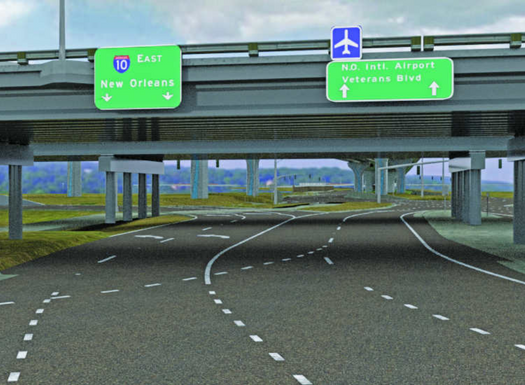 The opening of the $1-billion North Terminal at Louis Armstrong New Orleans International Airport in late 2019 ushered in a new era for flying into and out of the Crescent City, with the brand-new facility offering the latest features and amenities for a more streamlined travel experience.

Now, a design-build team is also modernizing the interstate access that will get travelers there—through a statefunded $126-million project to build flyover ramps for a direct connection from Interstate 10 to the new terminal.

The project is about halfway complete and on schedule, despite the challenges that come with building an elaborate interchange to serve an airport facility that’s already up and running.

“The opening of the new terminal presented challenges for this corridor [by creating] a significant influx of airportrelated traffic congestion at the terminal’s new access point.”
—Timothy Nickel, Project Management Administrator, Louisiana Dept. of Transportation and Development


The project includes constructing two elevated flyover ramps at the Loyola Drive exit of Interstate 10 in Kenner. One ramp will carry westbound traffic to the airport; the other will route traffic out of the airport and toward New Orleans. Underneath the flyover ramps will be new auxiliary lanes along I-10 between Loyola Drive and Williams Boulevard.

The project includes a diverging diamond interchange (DDI) that will allow two directions of traffic to cross each other and swap sides before getting onto the interstate. The interchange is one of the first of its kind in the state. Use of this type of interchange shaved off $60 million from the budget and eliminated the need for a third flyover ramp and a traffic signal that were part of the Louisiana Dept. of Transportation and Development’s (DOTD) original design.

“The savings are important,” says J.J. Hickey, project manager for lead contractor Gilchrist Construction of Alexandria, La. “We want the public to feel good about the project and see that our proposal saved the taxpayers and the DOTD a substantial amount of money with the DDI.”

The old interchange to the previous terminal required westbound vehicles on I-10 to exit at Williams Boule-vard and then proceed through a series of traffic lights and turns. “It was outdated and inefficient,” Hickey says.

Stantec designed the DDI, which eliminates the need for a left-turn signal and is intended to cut traffic light cycles in half, decrease delays and help traffic flow more smoothly. 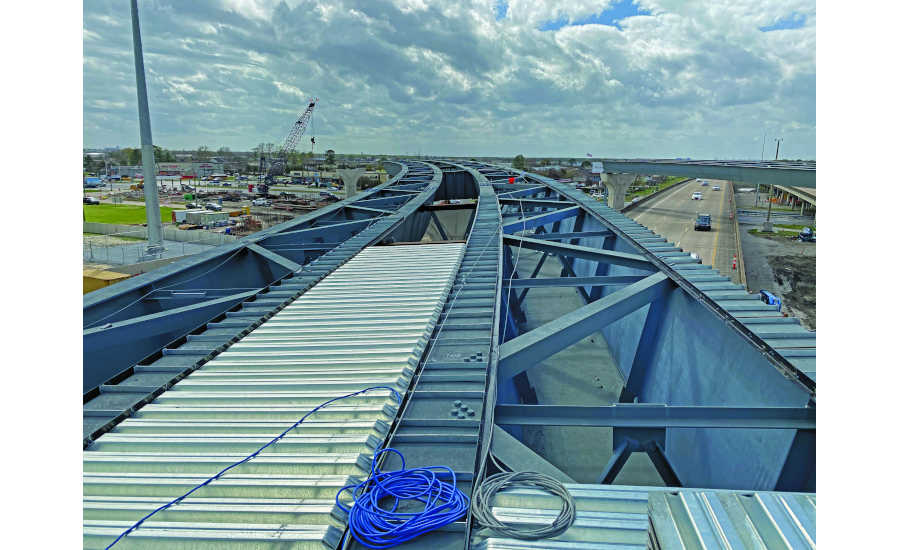 STEEL SUPPORT: Twin, tub-shaped steel girders are put in place for the flyover ramps. While not commonly used in Louisiana, the tub girders were chosen for their long, curved spans.

PHOTO COURTESY OF THE LOUISIANA DEPT. OF TRANSPORTATION AND DEVELOPMENT

FINDING A NEW WAY IN

Placing the terminal on the north side of the airport made it possible to construct a completely new facility from the ground up. But with the new location came a new dilemma—how to get there by car. The existing interstate connections provided access only to the original terminal on the south side of the property, creating a need for new direct access points from I-10.

Initially, the state did not have funding for the interchange project. So as an interim solution, the airport reconfigured Loyola Drive to serve as the primary route to and from I-10 and the new terminal. But the configuration was not ideal.

“Before construction of the new airport terminal, the Loyola Drive/Aberdeen Street corridor was primarily a local commuter route,” DOTD project management administrator Timothy Nickel says of the two-lane roadway, which is sandwiched between a predominantly residential and commercial area and swampy wetlands. “The opening of the new terminal presented challenges for this corridor [by creating] a significant influx of airport-related traffic congestion at the terminal’s new access point.”

After obtaining federal bond money for the flyover project, the department gave the design-build contract the notice to proceed in August 2019—three months before the opening of the new terminal.

“They needed to get the project off the ground ASAP,” Hickey says.

The need for quick action factored into DOTD’s decision to choose the design-build delivery method. “The Loyola interchange was an ideal candidate as airport access improvements would be required as soon as the airport terminal opened,” Nickel says.

Plans called for the project to be designed, built and completed in 1,180 calendar days, with a $20,000 penalty for every day that goes beyond that. To streamline the process, construction of temporary access roads began immediately while the design for other portions of the project were underway, Nickel says. 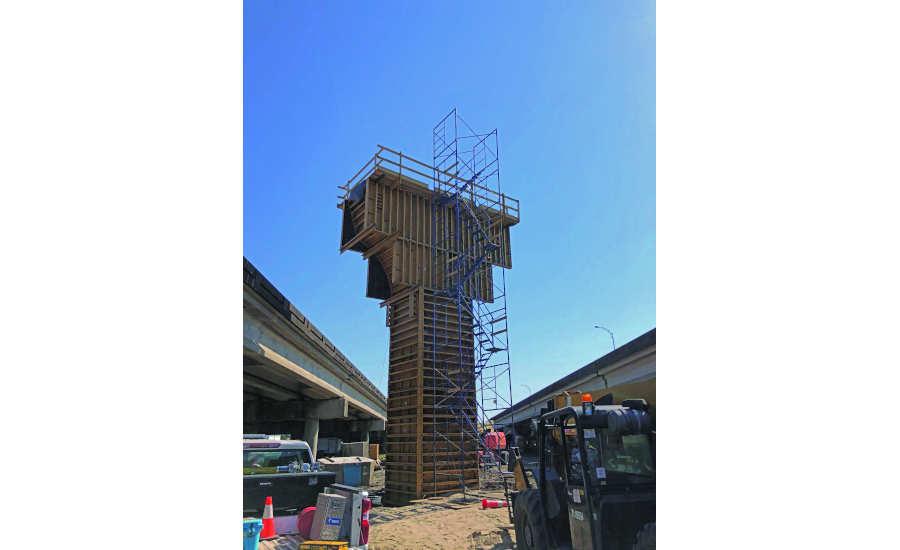 PIER REVIEW: Crews erect one of the concrete columns that will support the Loyola Drive flyover spans.

PHOTO COURTESY OF THE LOUISIANA DEPT. OF TRANSPORTATION AND DEVELOPMENT

The project’s large scope, along with the condensed timelines for design and construction, called for extensive planning and problem-solving by the design team.

“Traffic congestion and proximity to residential homes and commercial buildings provide challenges for maintaining traffic while constructing the project,” Nickel says. “The design-build team accelerated survey collection early in the project, at times providing 11 survey crews in the field to ensure accelerated data collection and to reduce project schedule impacts.”

Right-of-way considerations presented another issue as early assessments identified 20 property parcels that would require acquisition, with some properties needing to be demolished.

“The state has eminent domain. But you have to be fair with property owners,” Hickey says. “They have rights, and we have to respect those rights and make sure we’re acting responsibly.”

The design-build team was responsible for most of the acquisitions, while the DOTD acquired a hotel that needed to be demolished in the southeast quadrant of the interchange.

Gilchrist and Stantec were also charged with completing the interchange modification report (IMR), a submittal required by the Federal Highway Administration that must be completed and approved by the FHWA before any modifications to a federal highway can take place. Because the project needed to get start-ed right away, the document was not complete when the DOTD obtained funding for the project.

Hickey says the interchange is one of the first designbuild projects in the state to not have IMR documents already in place. And juggling the report with project design and right-of-way acquisitions made scheduling especially difficult. “You’re building a schedule based on a lot of assumptions and projections as opposed to building a schedule that’s based on a complete set of plans, where all of the critical documents and submittals are already approved before you start work,” he says. 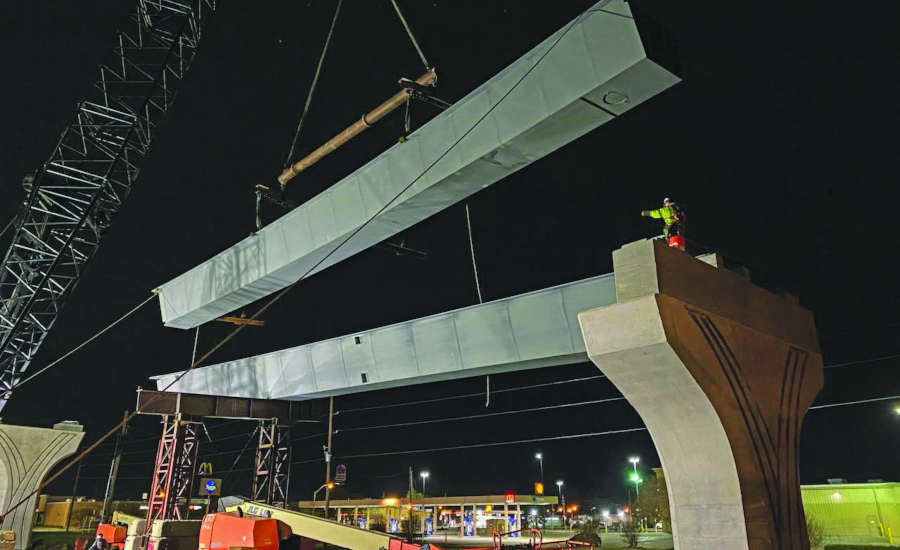 PIECE BY PIECE: Working at night in December, crews hang girders for the I-10 Loyola interchange. Installing the girders had to take place during the night to avoid traffic disruptions.

The addition of the two flyover ramps was the most noticeable change to the I-10 corridor near the airport. The ramps consist of curved, twin steel trapezoidal box girders, which account for 2,800 ft of the total ramp length and about 9 million lb of structural steel. While not commonly used in Louisiana, the team chose these tub-shaped girders for the flyover structures because of their long, curved spans, Hickey says.

During the design phase, there were several constraints that had to be considered, including fabrication, transportation, erection and final construction. “Existing utilities and the crossing of I-10 played a major role in determining span lengths for the steel girder spans,” says Brian Johnson, Stantec principal.

Footing placement had to be done in a way that would minimize utility relocations and traffic interruptions. Because the interchange is in a congested area, the piers had to fit where space allowed, Hickey says.

“We couldn’t just design these bridge spans for whatever length we wanted them to be,” he says. “The tubs allowed us to meet those lengths with the curved sections. And it was really the best solution.”

The steel tub girders required an especially long lead time because they were fabricated in Tampa. Hickey says the team set the wheels in motion to get the tubs approved, fabricated and shipped a year before placing the first girder. 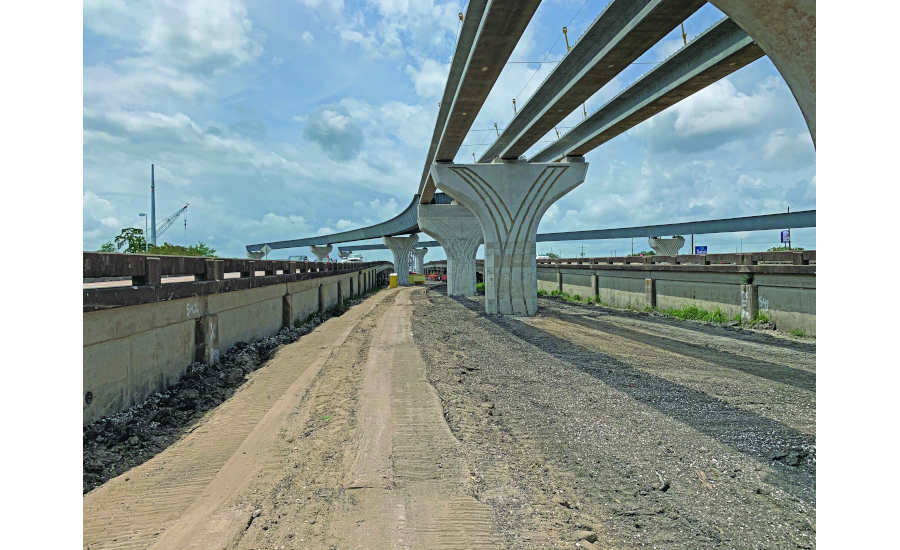 ATTENTION SPAN: The addition of the two flyover ramps is the most visible change to the I-10 corridor near the airport. Foundations and piers for both ramps were almost complete as of April.

Erecting the girders had to take place during nighttime hours, especially over I-10, and traffic operations during girder erection were modified to accommodate traffic while the lifts were taking place over I-10, Johnson says.

Collaboration meetings with the designer, contractor, steel fabricator and erector helped determine the appropriate lengths for the girder field pieces. “Allowing each party to provide input at initial design helped increase efficiency in the different phases of design and construction,” Johnson says. “The erector provided guidance on a maximum field piece length of 120 ft, while the fabricator gave insight on plate sizes and assembly practices.”

“We couldn’t just design these bridge spans for whatever length we wanted them to be.”
—J.J. Hickey, Project Manager, Gilchrist Construction

For portions of roadway where settlement was a concern, the project team placed additional embankments to compress the soils underneath. They also placed wick drains to create drainage paths and lessen water pressure, allowing the soft soils to compress quicker and expedite the settlement process. This would ultimately provide a smoother roadway with less maintenance issues in the future, Nickel says.

The team selected prestressed concrete piles for the bridge’s deep foundations, with pile lengths ranging from 80 ft to 95 ft.

Prioritizing certain components of the project has allowed the project team to perform construction and design concurrently, Nickel says. As of April, foundations and piers for both ramp flyovers were almost complete, and the steel tub girders over I-10 were in place. Foundation work for the flyovers along the Loyola Drive median has also begun.

The project’s design work is wrapping up, and noise wall design is also nearly complete, clearing the way for the fabrication of precast panels for installation along I-10.

A portion of the project will become functional this summer with the completion of a temporary access ramp to eastbound I-10, providing a more direct route during the rest of construction.

“Construction completion will allow for more streamlined traffic flow all along traffic corridors within the project area and beyond,” Nickel says.

The project is on track to finish by late 2022.